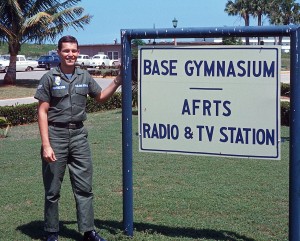 I arrived at Ramey as an A3C right out of Lackland AFB Basic Training, assigned to AFRTS. I left two years later as an A1C and made SSgt at my next base before getting out of the USAF after 3 years 9 months. 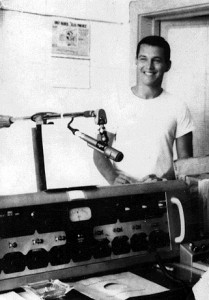 Here, in the Ramey AFRTS radio control room, where I did the AFCN “Morning Show” in early 1967, it was warm and we frequently took off our 1505s shirt. I can’t imagine ever being that young, or that slim!! 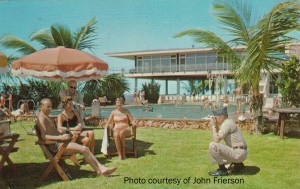 For those who will be attending our 2011 reunion in beautiful Puerto Rico,  just received this update from Ken and Bonnie Coombs:

REUNION UPDATE:
Rooms are now available at the Faro Suites – at the group rate. Call the hotel at 787-890-9000 for reservations. There are also rooms still available at the Marriott. Call Lorena at 787-658-8049. In both cases, ask for the RAFBHA group rate.
Entertainment: Unfortunately the Air Force Reserve Band (much to their disappointment) cannot provide musical support for the reunion, but the Committee is looking into a wonderful high school group who are experts at folkloric PR music and dance. We hope to book them soon, watch the reunion updates for news….

If you have any questions about our reunion scheduled for March 21-26th, 2011 check out our website at rameyafb.net

Supporter and Friend of Ramey, Rob Plested shares the following:

New Boeing 787 airframe #5, sitting on the Aguadilla ramp, getting ready to fly.
My son’s wife is a test engineer with this airframe. He’s an engineer aboard airframe #3.

Here’s post flight being done on the plane the evening of prior day.

A great time was had by all at  The Spirit of Ramey Family Reunion.  The reunion was held March 21-26 in Puerto Rico, and for those not fortune enough to attend, I  have to say the weather was beautiful and the fellowship with our fellow Ramey friends was the best!   Aguadilla Puerto Rico and Ramey Air Force Base is truly special.

The next posts on our blog will be pictures from the reunion.  I came to the reunion armed with a new camera and shot a bunch of pictures.  Our new RAFBHA Vice President, Ricardo Busquets also served as a photographer along with member, Ron Strong, so there is going to be good pictures to share in the days to come, so let’s get started!

We arrived a couple of days early for the reunion. Left Indiana early in the day and arrived in Aguadilla / Rafael Hernandez Airport at 3:00 in the morning. Half asleep, but happy to have arrived, I pulled out my cell phone andtook this picture as my husband, Fred and I got off the plane. It was sure good to see the tower again.

The next day President Chris Talkington called and invited us for liquid refreshments to House #19 where other members were staying. In the picture below you can see Chris, Clyde, Ken, Elton and Ted discussing some very important Ramey business. As I recall it had something to do with a Wiesel and a nickname. 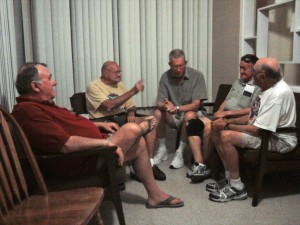 The gals decided to let the guys have their meeting and we took off across the street to take in the sunset. 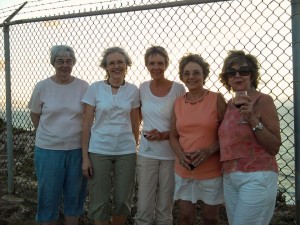 Getting Ready to Watch a Sunset

The sunset was beautiful and so was the fun and friendship of Mary Ann, Joyce, Cathy, Bonnie and Betty.

I’m off to do some secretary duties for Ramey, but there are plenty of pictures and posts to come!

During the reunion the museum unveiled their new location.  Located on Hanger Road near Gate 1, the museum is now housed in a new hanger .

The new location is perfect.  There is room to grow, plenty of parking, and all on the ground floor (no more stairs). 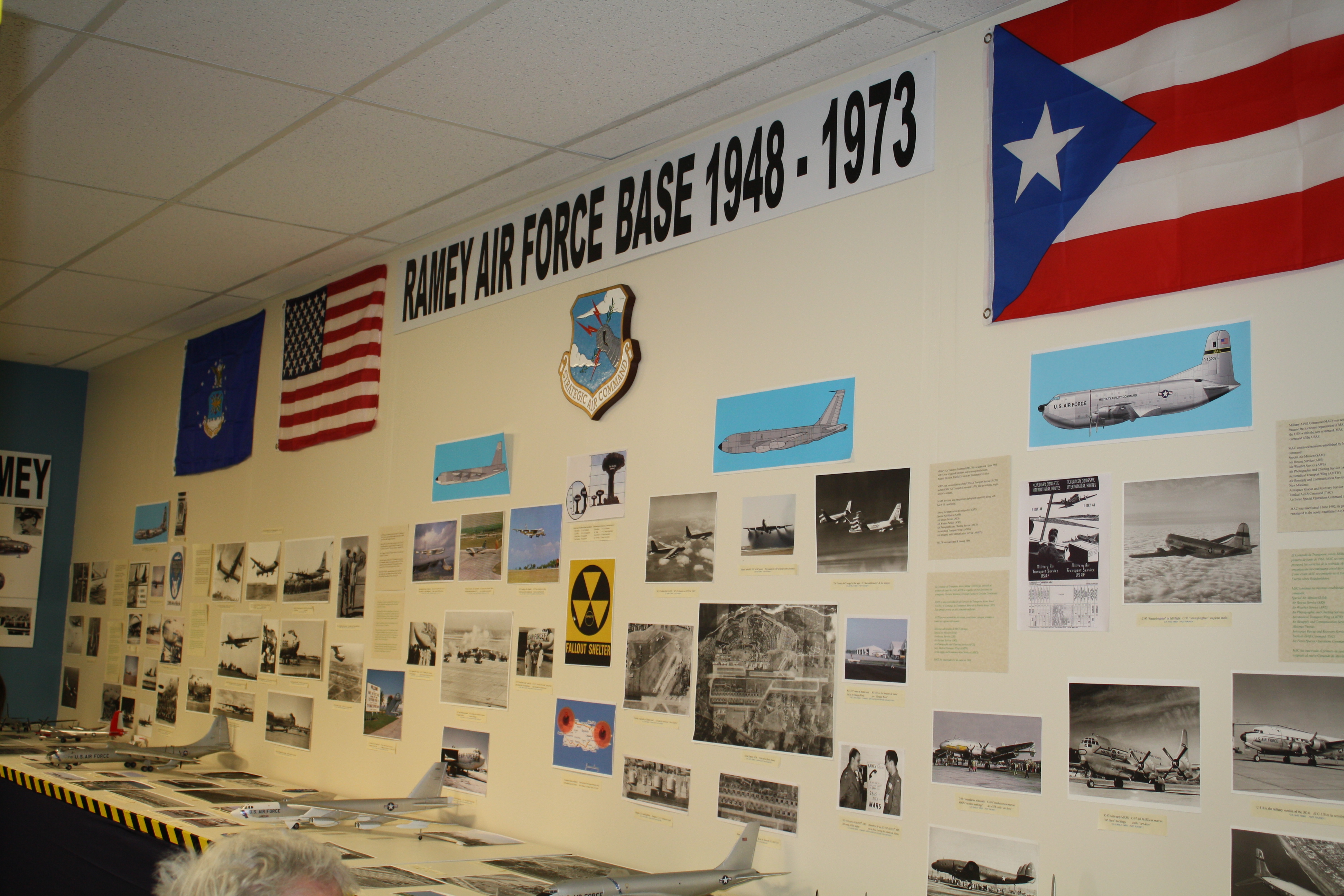 Thanks to the help of some very devoted volunteers, all the museum displays and supplies were moved from the old location to new.

With fresh paint and a little carpentry work, the museum was ready for the reunion.  Great job Ramey Museum Staff and Volunteers!

All the comments I heard about the museum were very good.  This is such an exciting time for the museum.  Stay tuned for more pictures and posts. 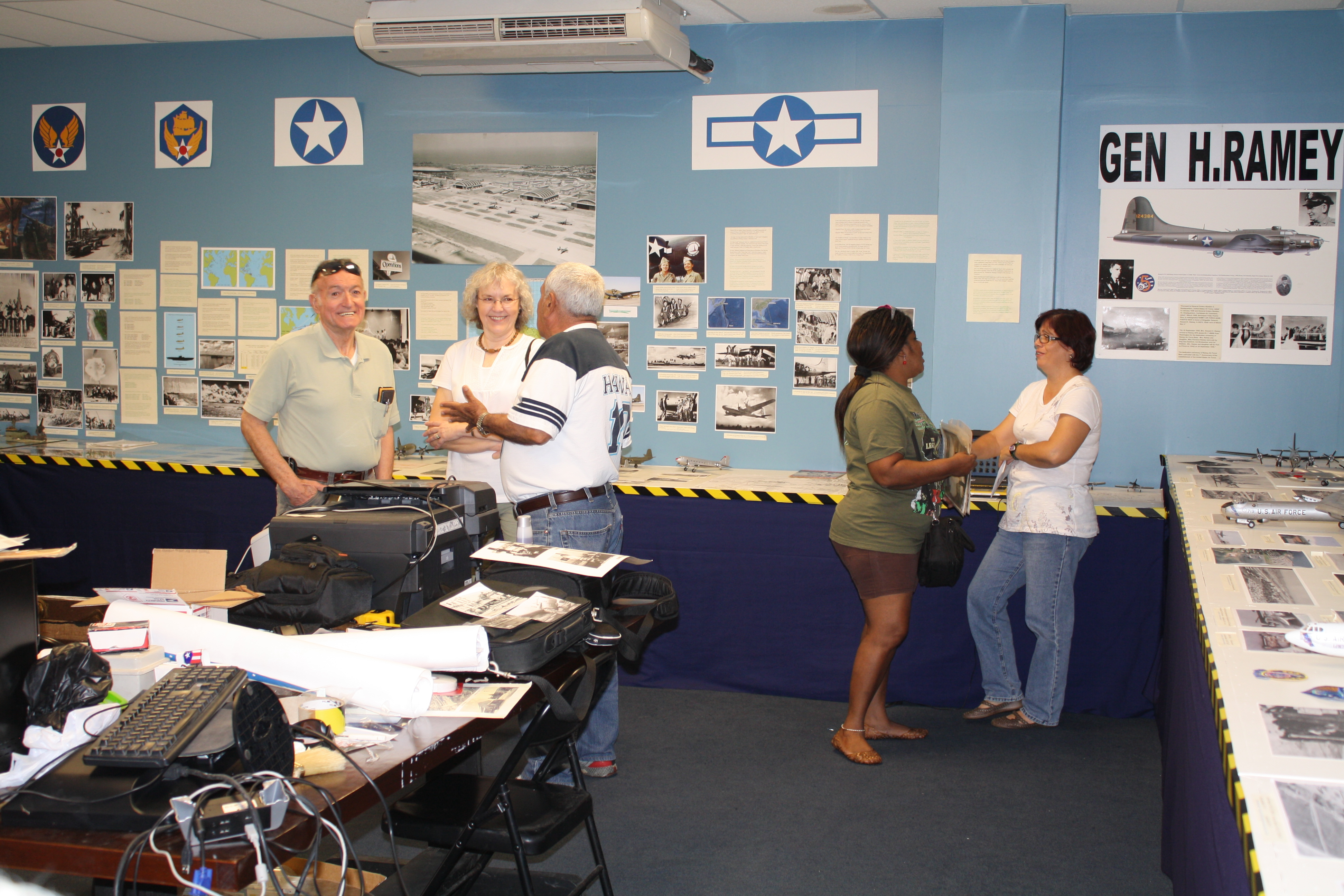 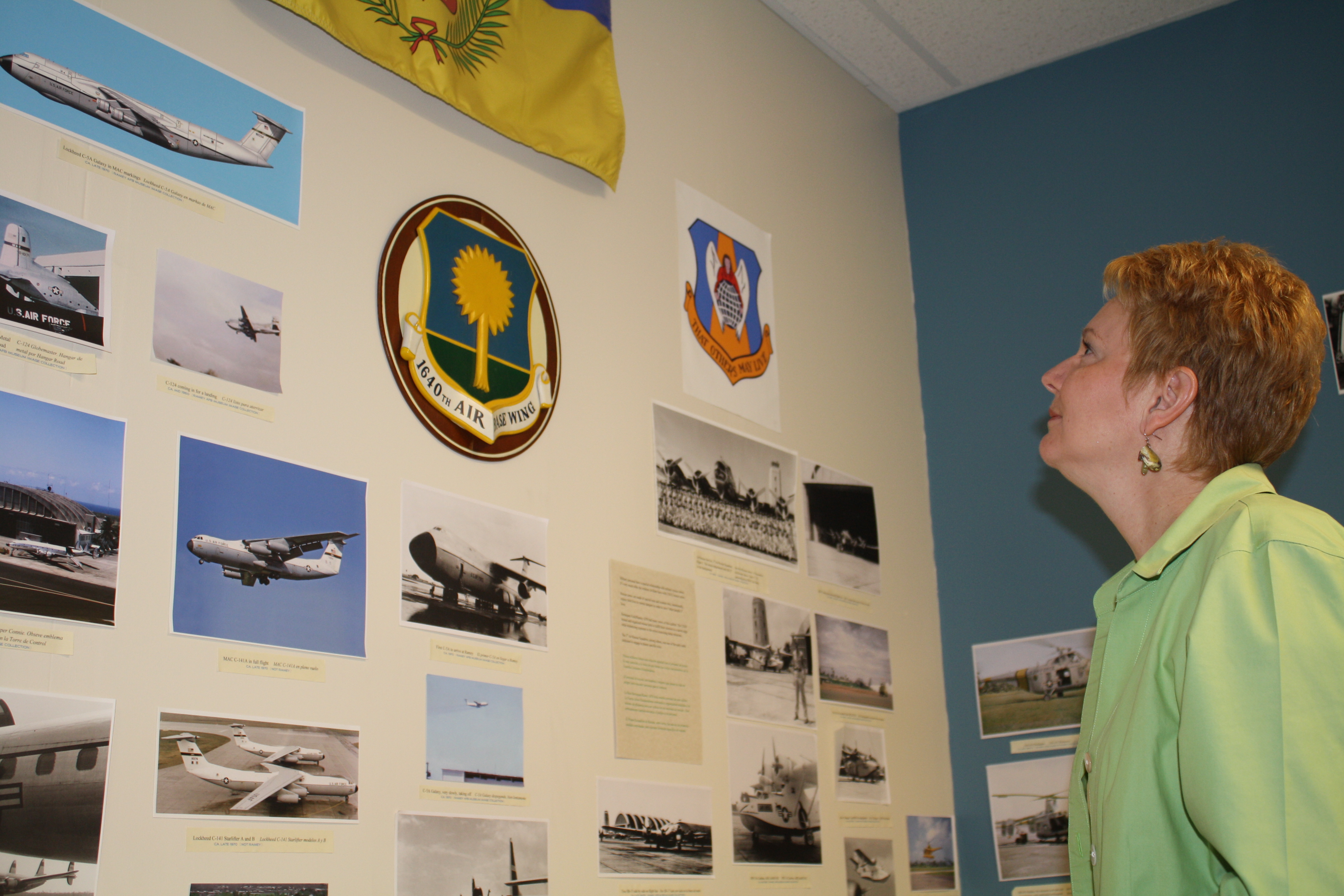 Since the Museum opened up we’ve had the pleasure of one visitor mention he was at Ramey (Borinquen Field) in 1939, that is until today.

A visitor casually walked into the Museum and as usual was welcomed by one of our volunteers. Before we were able to greet him properly he said, “I was here in 39”, let me take a look around. Well …we couldn’t wait for him to finish looking around and boy did he take a look around. As far as the Museum volunteers was concerned there was no way he was leaving the premises without asking him a million questions and hearing his story. 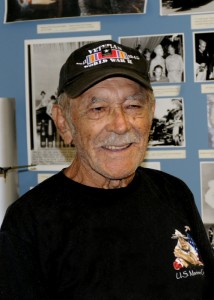 His name is Agustin Martinez, originally from San Sebastian. His godfather was part of the crew laying the cast iron pipes for the base to be. Agustins godfather was able to get him a job in 1939 as a “plumber’s helper” and was entered into the base payroll at the age of 14!!!.  “My real job was water and food bearer”. In between these tasks he was also assigned as a messenger boy. “This was all on foot; I did not have a bicycle”.  Agustin remembers the pipe trenches being dug out the old fashion way, with picks, shovels and a lot of sweat equity. Heavy equipment was at a premium and priority was given to the runway and hangar construction.

He watched as the hangars grew out of nothing and was present when the first B-18 Bolos arrived at Borinquen Field. He also saw the 155mm Coastal Defense Guns as they paraded down “Hangar Road” every 4th of July. “There was so much activity I wondered why Punta Borinquen did not break off the corner of the Island”.

When he turned 18 he was drafted into the Army. He grabbed the tail end of WWII but was in the thick of it in Korea. He was part of the 65th Infantry Regiment, an all P.R. regiment of the time. Never being in any weather colder than 60° he could not believe how anyone could survive, let alone fight in sub zero temperatures, but he did. Agustine retired in 1965 after 20 years of service.

But his story does not end here.

In 1966 he moved to Aguadilla and worked at the MATS transient hangar at Ramey AFB.  Of all things he was involved in the closing of Ramey in 1973.  He was part of the team who actually took inventory and physically put padlocks around the Base. “There were houses fully furnished and emptied out warehouses packed with cars, jeeps and all sorts of trucks”. “They were all inventoried and padlocked”.

Agustine was so thrilled that anyone would keep the history of Ramey alive, let alone in a Museum, that he immediately joined the RAFBHA and put some “dinero” into the donation jar. Augustine’s daughter was so excited by her father’s accounts of the Museum that she visited the facilities the following Saturday. They are now planning a full family visit so “grandpa” can tell the kids what he did at the tender age of 14.

Now 86 Agustine wants to be involved in all the “reconnaissance” we do around the base for “Museum documentation purposes”. I believe if we were to forget to take him along we would be FUBARed in an orderly military fashion by Mr. Agustine.

By the way Augustine’s wheels is a 1971 GMC “Caballero”, Google that one.

Message Body: I was in the USAF stationed at Ramey AFB from 1954 -1956. I was an ECM Operator (Electronic Counter Measures) on Major Robert O. Loyd’s RB-36 crew. I was in the 73rd Strategic Recon. Squadron, 72nd Bomb Wing. The RB-36, tail # 012, in the photo at the bottom of your home page , is the first RB-36 I ever flew on . In 1955, Loyd’s crew was selected to represent Ramey at the premier of the movie “Strategic Air Command” at a theater in San Juan, Puerto Rico. Each crew member was introduced to the audience. The same year Loyd’s crew was selected to represent Ramey at the SAC annual Navigation and Bombing competition at Travis AFB, Calif. This was a great time in my young life. I have a picture of this crew and some other photos of Ramey if you think they would be of interest.

-- This mail was sent via contact form on Ramey Air Force Base Historical Association www.rameyafb.net

Lori, me on the right, and Paul Knott on the left. I found Paul about three years ago. He lives in San Jose, CA. North of me. I will forward your email to he and Pat. Imagine he met Pat while we were at Ramey, and they are still married!!!

I will get Paul to tell his story about that. This is on the PR side in front of what was Polo's. I shared a beach house behind those trees with the whitle painted base.

Message Body: My Grandfather was Col. Samuel Grigsby Porterfield. He died on February 1, 1960 as a result of a B-52 crash on the air base. My father, Samuel Don Porterfield, was a teenager at the time, but went on to become a Colonel in the Air Force and has since retired. My son is doing a project about family, and I would love to have some information about the Porterfield House that was named after my grandfather. I have searched the internet, but cannot find any pictures of the house or the plaque that is situated outside of the house. Do you happen to have any information or photos of the Porterfield House? —

This mail is sent via contact form on Ramey Air Force Base Historical Association http://rameyafb.net 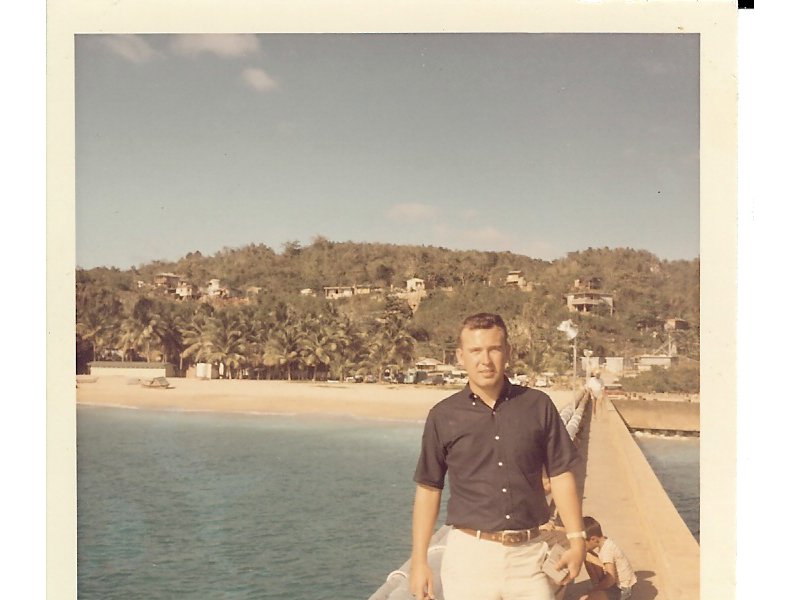 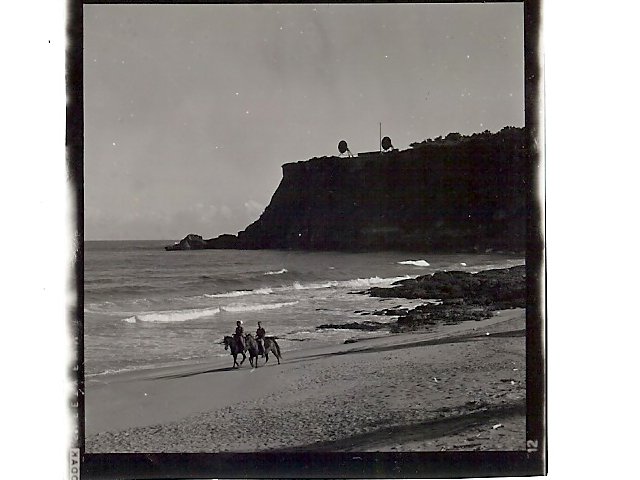 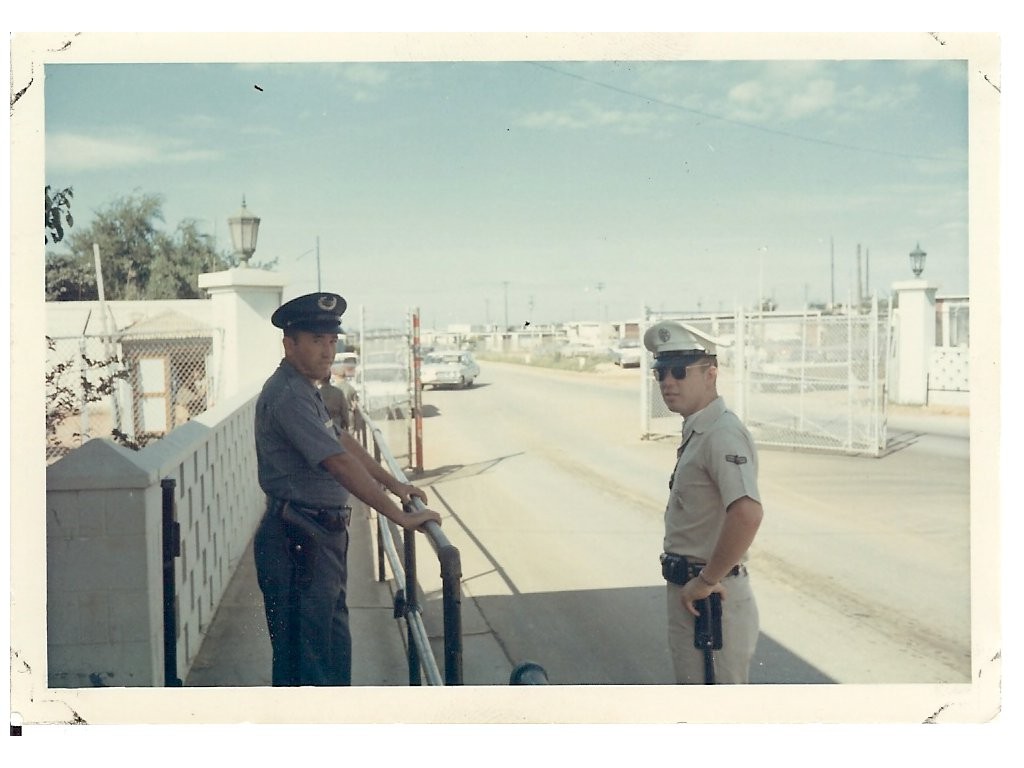 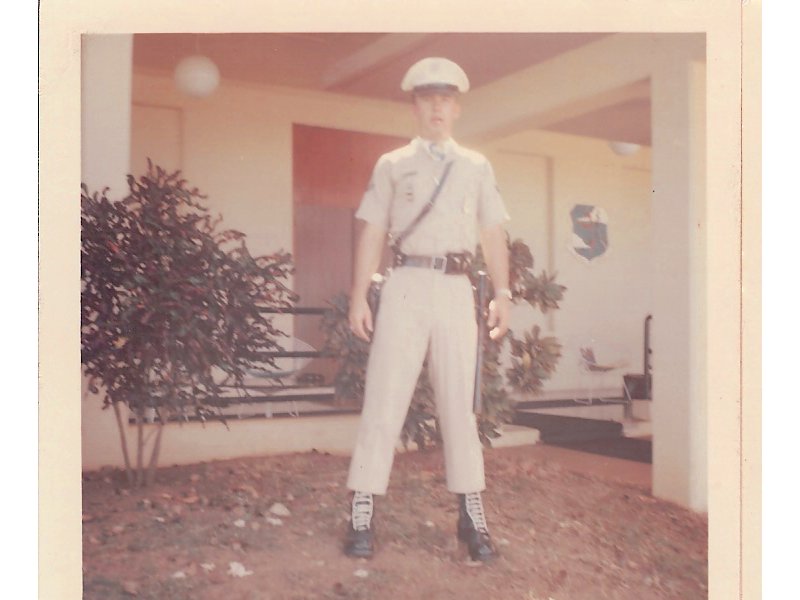 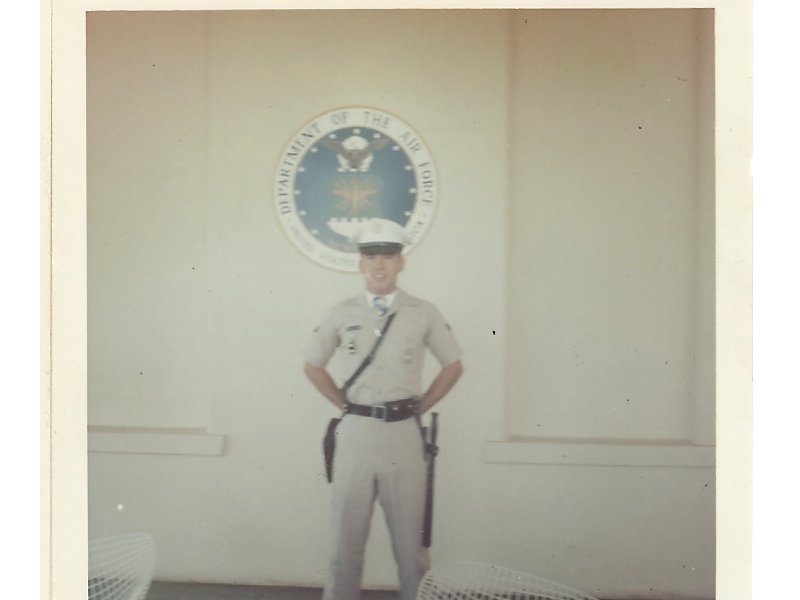 Thanks Ken for sharing these photos.  Keep the pictures coming!