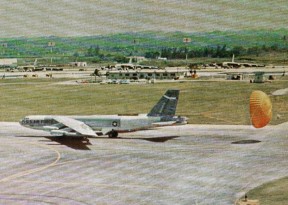 It was my turn to occupy the launch truck the morning a B-52 developed power problems.  Twice the aircraft aborted takeoff.  Twice we caught up with the aircraft where our engine man opened the cowlings and made adjustments.

Rumors were that at least two hours were needed for the tires to cool prior to a third attempt.  However, the aircraft commander decided the tires were okay.

He almost made it.  Seconds before he was fully airborne the left front tires on the main gears exploded and took both wheels with them.

The remainder of the day was spent on the phone with Boeing trying to brainstorm a way to get the airplane back on the ground.  All the while the aircraft flew a pattern.

Of course, we couldn’t hear the phone conversations, but our shop radios allowed us to monitor the chatter between the Command Post and the Aircraft Commander.

By mid-afternoon the Command Post advised the Aircraft Commander of a way to retract the damaged landing gear while leaving the other three extended.  The Command Post also advised him exactly how many pounds of fuel should be in each wing when they attempted a landing.

In due time the bomber came to a halt near Hanger 5 on three main gears and wingtip wheels.  It sagged heavily to one side, but nothing scrapped and the aircraft lived to fly another day.