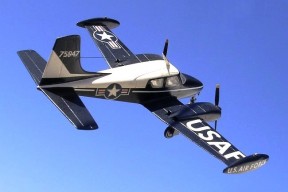 A Cessna 310 was assigned to Ramey AFB.  It probably replaced the C-47 and was used for short flights, transporting VIPs.  It served most often for bringing medical specialists from San Juan to the Ramey Hospital.  It was a monthly activity and always went off without a hitch, except for the time a landing gear malfunctioned.

On this particular aircraft, when the main gears extends the wheels come down perpendicular to the direction of flight–sideways.  Then, just prior locking, they rotate 90 degrees.

During the flight in question, the Deputy Commander of Maintenance was bringing medical specialists from San Juan.  When the gears were extended (I think the right one…the one opposite the door) one wheel didn’t rotate the necessary 90 degrees.  The Colonel flew the Cessna back and forth past the tower a number of times for a visual.  We were too far away to see well, but the tower seemed packed.  No doubt, everyone who was anyone was present.

From the shop radio, we gathered that it became a unanimous decision that on touchdown the malfunctioning wheel would correct itself, spinning that 90 degrees.  But the brakes should not be applied.

A foam truck was dispatched and laid a gigantic strip of retardant on the runway.  The last instructions were that the airplane should set down within the foam in order to suppress any sparks if the gear collapsed.  And then the radio went silent.

It’s the aircraft commanders call when he is airborne.  His decisions are final.  And he chose to overfly the foam.

Apparently the wheel reacted as predicted.  The situation seemed well in hand until it had nearly stopped rolling. Then the gear collapsed.  After falling down on one wing tip, the 310 rotated in a couple of circles like a broken tricycle.

The moment it stopped the door popped open.  Everyone ran to the wing tip and jumped off.  I don’t recall hearing of any injuries or serious damage to the aircraft.  (Apparently, the propeller didn’t come in contact with the runway.)

The after action report stated that the landing gears had been serviced the previous day.  Someone had failed to replace a cotter key.

Please Note:  The photo shows many markings.  I don’t recall the one at Ramey having those.  Has my memory failed me?   A Google search reports that this bird was also called a U-3.