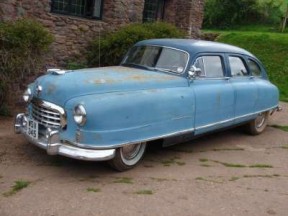 I wonder who recalls the old blue Nash, the upturned bathtub?

It was brought to the island as a relatively new automobile, or so I heard.  During my tour it changed ownership a few times.  If my memory serves me well, the last time it changed hands for $50.

Some weeks following this final vehicle exchange I was sent to NCO Prep School.  Barb was about five months pregnant and on her own again.

Graduation time arrived and Barb made arrangements to ride from Isabela to Ramey with a friend, the wife of a fellow airman who was also graduating from prep school and was the new owner of the blue Nash.

They were en route to the base when the right hand A-frame, suspension, wheel and brake assembly broke off, sending the car into the ditch, as it were.  Thankfully, no one was injured.

They abandon the Nash and flagged a Publico, exchanged it for a different one when they reached PR2.  At the gate they rode a Chevy-2 taxis to the nursery to drop off the kids, arriving at their destination just as the ceremony was beginning.

The blue Nash remained at the roadside for a couple weeks and then disappeared to who knows where.