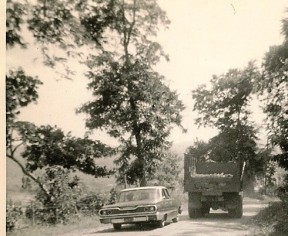 I think it was early in 1965 that our radio/radar shop in the 72nd A&E Squadron took a big hit because of the war in Southeast Asia.  With no warning the number of authorized personal in our section was reduced from 34 to 19.  As a result, my hours on the flightline increased substantially.  Because Barb didn’t drive, she always depended on me for transportation.  This change meant she was going to have to learn how to cope with the publico system.  She was fearless.  With two very young children in tow she learned how to get where she needed to go when I was gone.

Six weeks before rotation date, I sold our rusty VW and from that day on we were entirely dependent on a bicycle and publicos.

We’d made friends with some local Puerto Ricans and a week or so before departure we caught a publico to their house for a final farewell.  Barb had grown so comfortable with publicos that I stayed mum and let her handle everything.  She hailed the car.  Three Puerto Rican men occupied the front and we four were in the back..  The men chattered among themselves and several times the word Americano was uttered and several times they all laughed.

The driver slammed on the brakes.  As I paid him he asked, “Does your wife speak Spanish?”