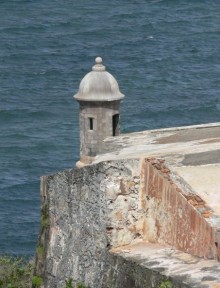 When I arrived at Ramey AFB on 12 June 1963 one of the first things I received was a welcoming packet issued to newbie. I don’t recall who was responsible for this “gift”, but I, for one, found it very informative.  Included was a glossy publication that might have been 24 pages  in length that described the precautions that should be taken in defense of the liver fluke found in the inland waters, places of interest we could visit — Phosphorescent Bay, the Rain Forest, Old San Juan, and, of course, El Moro.

During the period of my Ramey tour the El Moro moat was a sandy 9-hole golf course that, it was said, President Eisenhower enjoyed many times over. But the event that remains most vividly embedded in my memory was story of the German War Ship that sailed into San Juan Harbor in 1939 ((?) this date leaped to the forefront, so I assume it must be correct).

At the time in question Old San Juan was defenseless except for the battery of ancient cannon left by whomever was last in charge. Gun powder was available as well as people who knew how to use it, but someone had cemented the cannon balls into attractive pyramids and no one was able to free them before the enemy ship would begin firing on the city. However, the folks in charge of defending San Juan were not so easily intimidated.

They made use of what they had — broken glass, nails, railroad spikes and such and  fired two rounds of garbage across the bow and then put the ship’s crew in irons.