Here at the Museum we have a pretty big list of subject matter we wish to continue adding to our repository. To that end the Museum staff spends a vast amount of time doing research. It’s what we spend most of our time with.

Last Saturday USAF retired SSgt Jose F. Jimenez Barreto visited the Museum for the first time. After checking out the Museum he felt confident his three simple donations, as he called them, would be safe at our facilities. 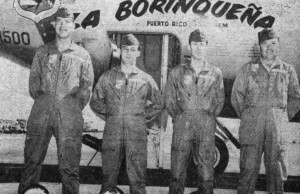 When he handed us the third image I couldn’t believe it, there it was, an image of the first KC-135 to arrive at Ramey. She had been christened “La Borinqueña”.

We have many “first” images at the Museum but this KC-135 had eluded us for years. She arrived at Ramey to grand fanfare 5 December 1958.We have many articles describing this event but was missing an image to close this chapter of history.

It might seem unimportant but this was the very first of so many KC-135s that called Ramey home for such a long period of time. The dynamic duo of the B-52 and KC-135 became such a common sight that they became as familiar as the palm trees at Ramey or the constant breeze at the base.

Thanks to SSgt Jose F. Jimenez Barreto we can scratch one from the list !!!