Many, many thanks goes to Orlando Gallardo Jr.

Orlando is a frequent contributor to the Ramey AFB Facebook site and the material he shares is just amazing.  If you use Facebook and have not visited the Ramey site, I encourage you to do so.  The link to the site is Ramey Air Force Base Facebook Page

Here is a picture Orlando shared back in February. 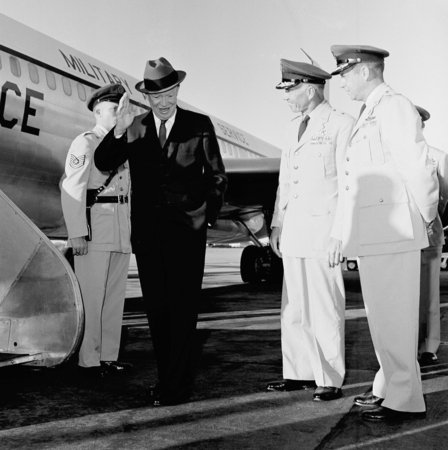 As he boards the presidential plane for long flight to Brazil’s new capital (Brasilia) President Eisenhower gives a farewell salute to Brig Gen Joseph J. Preston commanding 72nd Bombardment Wing and his host at Ramey Air Force Base, (Tuesday) Feb. 23, 1960. At right is Colonel William G. Draper the president’s personal pilot. (AP Photo)
The day before President Eisenhower flew to San Juan where he met with Governor Luis Muñoz Marin and his Cabinet. Later that day President Eisenhower flew to Ramey and played golf with Preston, Draper and his Press Secretary James C. Hagerty. The last event that day was a reception in his honor.